That gives us some idea of how Anderson compared to the average rider – he was much better overall – but it doesn’t necessarily tell us about how he compared to the elite riders that he’s now competing with at the top of 450SX.  Let’s compare Anderson’s amateur and early pro years in the %-ile Overall chart to some other riders, to see if we can get an idea if perhaps he was already primed for success, or if this supposed magical offseason training is what was needed to get him to the next level.  Compared to Davi Millsaps:

That’s a pretty big gap in their age 14 through 19 seasons, with Millsaps maintaining an edge up until their 22-year-old seasons.  For Anderson, that takes him through this most recent MX season, where the noticeable improvement happened.  But the data doesn’t include (yet) the current 2016 Supercross season – which would indicate that Anderson had shown a noticeable improvement even before his offseason training.  Let’s add in Cole Seely, whose MX results, interestingly, rate below both of the others’ during pretty much Seely’s entire career: 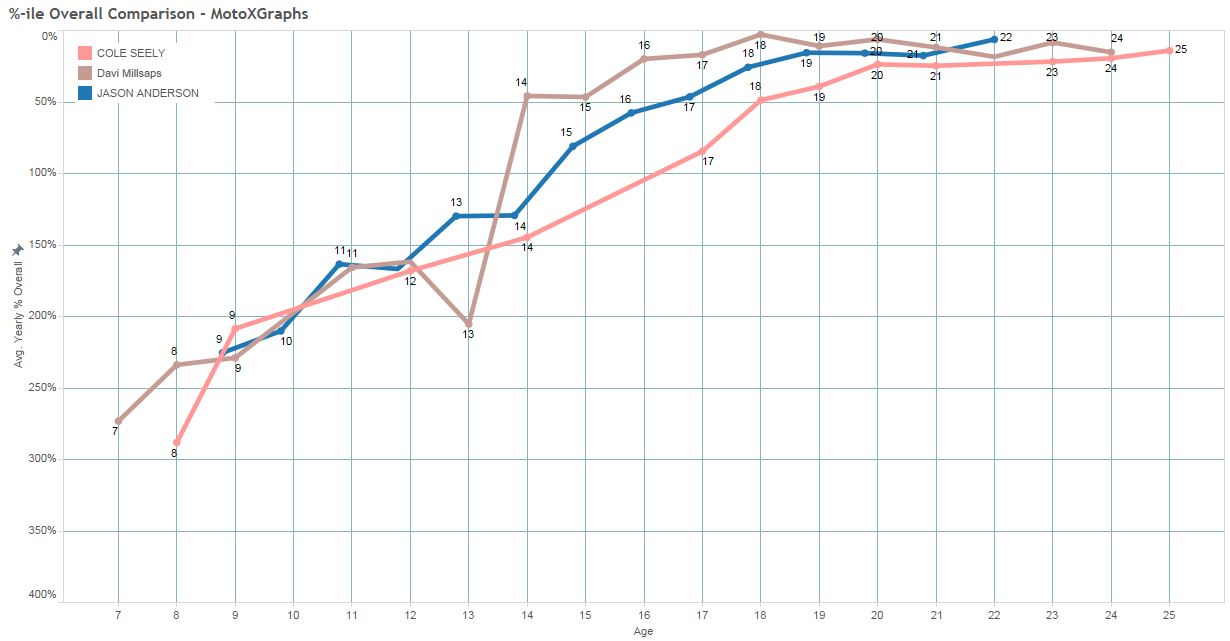 Again, this doesn’t include Supercross, and our 450SX predictions rely only on historical 450SX results, so Seely was predicted at 9th—just above Millsaps (10th) and Anderson (12th)—based largely on his good 2015 results.  Seely’s good start for 2016 may show that his 2015 was not a fluke but a legitimate improvement, but we’ve got a ways to go.  And if the first two races are any indication, Anderson is poised to continue his previous trend of better success than Seely has had.  Millsaps, on the other hand, has 6 seasons where he’s finished in the Top 3 for 450 Motocross or Supercross by his age 27 season.  Based on Anderson tracking consistently below Millsaps through age 21, I’d be skeptical that Anderson could do the same.
This comparison is so much fun, I’ve added a tool here: %-ile Overall Comparison.
Couple more.  Anderson and Trey Canard – just like Millsaps, Canard jumped up to a good amount of success earlier than Anderson, though there’s not quite as big a gap: 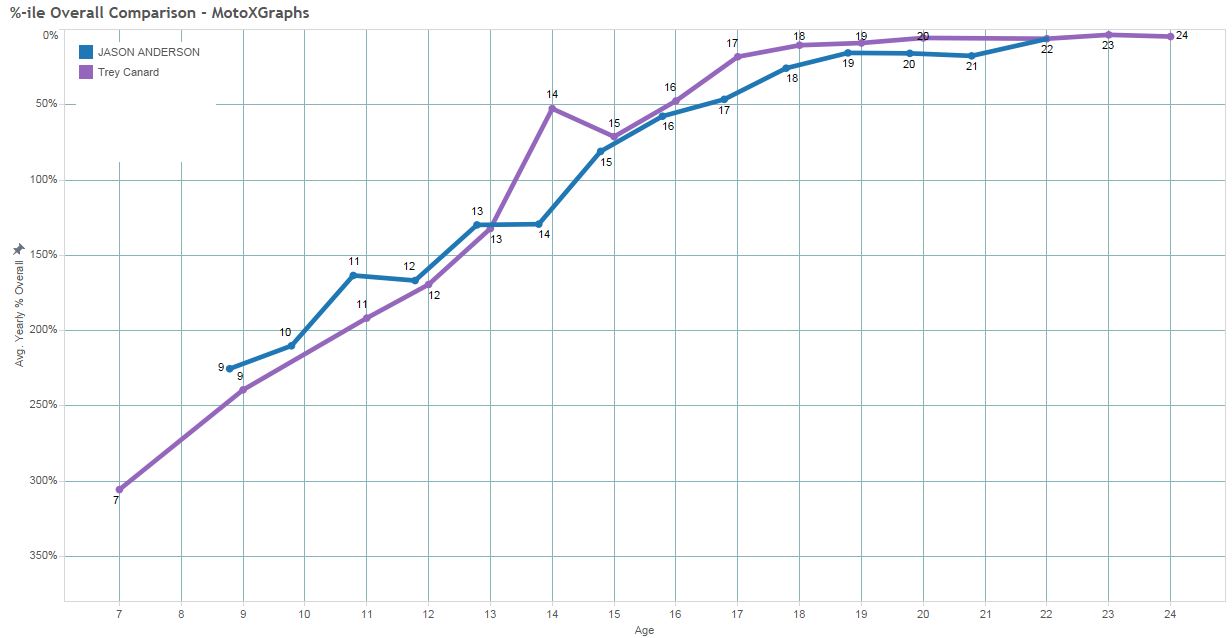 After Canard’s 17-year-old season (where he really distances himself from Anderson in the graph), Canard has ridden at an extremely high level…when he’s healthy.  But, again, if you’re looking at this chart alone (not that we are or that we would), then I think you see Anderson lagging behind Canard, and I don’t think you expect the same amount of success from Anderson as Canard – unless that age 22 improvement from Anderson reflects a new level of performance and not a one-time blip of random success.
Finally, let’s look at Stewart and Dungey, one of whose track record looks about as expected, the other a bit surprising (to me, anyway).  Stewart distances himself from Anderson in the age 15 and 16 seasons, then maintains his well-known high level of success that Anderson has not quite approached. 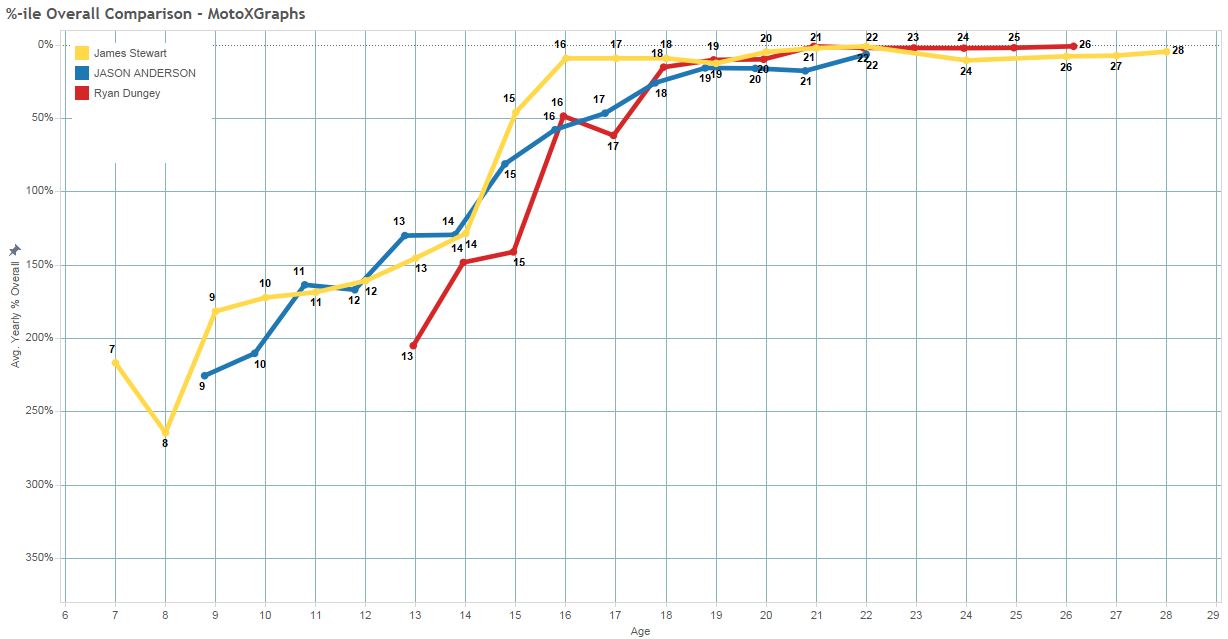 Dungey, on the other hand, rode a mix of amateur 125cc and pro 250 class races in his age 17 season, which was the 4th year out of 5 in which he was below the performance level of Anderson at corresponding ages.  After that, of course, Dungey’s results jump up, and within a few years he runs along the top of the graph (note that I had to extend the axis to show the age numbers for Dungey because they were above the 0% line).  Perhaps Dungey had a late start on his development because of growing up in the cold-weather (a phenomenon well-known for many outdoor sports) of Minnesota, but that’s a topic (albeit an interesting one) for another day.  But the point here is that sometimes top rider’s growth curves look just like they should (i.e. Stewart’s) and sometimes they don’t – even for an eventual superstar like Dungey.
So, are we closer to figuring out our question – is Jason Anderson’s improvement coming from Nature or Nurture?  Yes, Anderson went through a new training program with a vaunted trainer – but, young riders improve, generally speaking.  That’s Nature—and Anderson appears to be approaching riders like Millsaps and Canard in terms of performance level while already outpacing Seely.  All this riding at a high level was happening before Anderson went through his offseason training, as possibly seen in the mini-spike from his 2015 450MX season, and again that points to Nature.  On the other hand, if Anderson makes a legit run at #1 for 450SX the rest of the way in 2016 and/or puts up a convincing 2nd-place finish with a big margin, then that certainly opens the door for the Nurture argument – something seems to have pushed him up to a level way above Millsaps or Canard or Tomac, etc.  If he falls back to the pack…well, I think it’s hard to argue that his training program got him there rather than his existing talent.  Only time will tell, and that means it’s time to look forward to Week 3, back in Anaheim this Saturday!

P.S. -- The next time we see Anderson pass Seely and the announcers decry Seely’s lack of finishing ability or grit or what have you, I think we can point to the fact that Anderson’s shown better results all along his career and it’s not so much Seely’s lack of toughness (or whatever claim gets put forth) as it is Anderson simply appears to be a better rider.
P.P.S. -- One last comment is that Musquin also trained with Aldon Baker and Anderson/Dungey this offseason, but I haven’t heard any remarks from commentators about Musquin’s failure to surge up the leaderboard.  Odd how the Nurture argument fits the pattern for Anderson but no so much for Musquin, yet we don’t really hear about the latter.

Footnote: What’s behind the %-ile Overall graph?
First, we have to cover Modified Advancement Points (mAP) (Yes, lowercase “m”.  No, I don’t really know why, that’s just how advanced stats represent that something is different from the original: with a lowercase letter).  The idea is that they’re still a form of Advancement Points – awarded to riders for how well they perform in a race.  But unlike the traditional stat, Modified Advancement Points are scaled against the average rider in the race, rather than just a sliding scale down from first.  Also, while both AP and mAP attempt to reward riders in races with more entrants by awarding more points, AP uses a simplified method (as they should, considering that it needs to be easy to interpret and apply) and mAP uses a method that awards an amount of points precisely specific to the number of riders in the race.  Riders finishing above average in a race are awarded positive mAP, and riders finishing below average in a race are awarded—hold on to your hats here—negative points.
Then, before mAP can be “final”, an adjustment is made to factor in the quality of the competition in the race.  Riders competing in a Loretta Lynn Regional Qualifier or Final are given more mAP than riders in other races.  Once that adjustment is made, we can average points per rider and look within, say, the Schoolboy B class and see who in the country performed well and who didn’t in a particular period of time.  In this case, in each year we rank every rider in each class in terms of percentile, where the best riders are in the 1% (or smaller, if the class has more than 100 riders) range, and the worst riders are in the 99%+ range.
Once we determine how all the riders stack up within the classes, we have to put each class in context with the others.  How does the rider who did well in the Schoolboy B class compare to a rider who did well in, say, the Supermini class.  By looking at riders who compete in multiple classes within the same year, we determine the adjustment to apply to results from each class so that we can relate them to each other.  Essentially, you can start with the 450 Pro MX class (aka “Upper Pro”), where riders are ranked from 1% to 100%, then compare to the 250 Pro MX class (aka “Lower Pro”).  The question is, essentially, if a rider finishes 50% (exactly average) in the 250 Pro MX class, where would he finish if he went up a level into the 450 Pro class?  Let’s say, for ease of use, that he would finish at 60% -- a 10% penalty (it appears to be more like an 8% penalty).  Then, a rider who finished in the 10th percentile in 250 Pro would be expected to finish around the 20th percentile in 450 Pro; or, if a rider finished at 75% in 450 Pro, he would have been expected to finish at 65% in 250 Pro.  From there we can compare 250 Pro to the 450 Amateur class – a 36% penalty, and all down the line.
Now that every racer’s results are put into “%” context in terms of size of the race, quality of competition, and class, we can compare any race result with another.  For the %-ile Overall chart, we average a rider’s results for each year in terms of % and we can trace a rider(s) progress from year to year, either by age or by calendar year (or both).
(Note: The terminology of “%” is used to indicate how the values are structured, but the idea of % starts to break down when you compare very disparate classes – for instance 250 Pro and Supermini, where the “penalty” would be 116%.  So even the best rider in Supermini, if he somehow managed to ride in the 250 Pro class, CAN’T, by definition, finish at the 116th percentile.  In terms of ranking and percentile, the “%” is sort of a figure of speech, if you will.  I could re-calibrate the % scale so that everyone fits within 100%, but I like the idea that the Upper Pro class is a nice round 1% through 100%, and everyone else is relative to the top class.)

(I’ll copy this into the “What?” page, for future reference.  Oh, and in the %-ile Overall Comparison Chart page linked above.)