The updated season predictions and This Week predictions for Arlington take into account riders' past seasons as well as their entire 2017 season -- as it should.  But what if the Eli Tomac we saw at Phoenix and Oakland is the real, new Eli Tomac?  What if something just clicked and he should be expected to ride this way for the rest of the season?

Let's take a second to talk about how the rider's True Talent is figured and how the projections are calculated.  (It's detailed from top to bottom in The MX Book if you really want to understand what goes into the predictions.)  Tomac's projected speed is based off of not just his last 2 races but off of all of 2017 plus the prior 3 years.  If you look at his entire Supercross body of work, he lags behind Ryan Dungey each of those years.

Next, you apply an age adjustment to put the prior seasons in context with the current one -- is the rider young and expected to improve or old and expected to decline?  Or is he just exiting his prime and expected to stay about the same, i.e. Ryan Dungey in 2017?  Tomac gets the benefit of an upward aging adjustment while Dungey gets an ever-so-slight downward adjustment for being 27.

Put those together, and despite 2 great weeks from Tomac, there is still quite a gap between #1 and #2 (47 (!) points) for the final predicted 2017 standings: 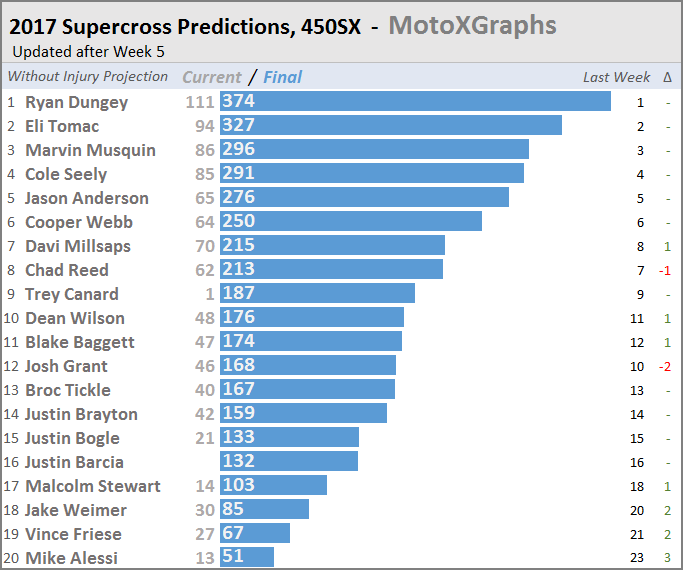 This method works in general because it evens out the peaks and valleys of performance over weeks and years.  Where it fails is when someone's "true talent" changes so that their prior results are not as indicative of the level they're riding now (think of Jason Anderson in 2016 -- he made an improvement where his riding was night-and-day better than his 2015 season, and his 2016 performance deviated distinctly from the projections).  Is that the case for Tomac in 2017?  Let's assume that it is and look at 2 different scenarios.

First, let's say that Phoenix-and-Oakland-Tomac is the real deal for this season, but prior seasons should still be taken into account.  Accordingly, for 2017 we'll only include points & laptimes (the basis for the predictions) from Phoenix & Oakland.  In this hypothetical, the new projection would say that it's close to a toss-up in any given week between Dungey and Tomac:

Dungey still has the slight advantage, and the final predicted standings would be much closer -- but Dungey still prevails with 376 points to Tomac's 352 (22 point gap).  That would at least make things exciting right through Week 17 at Vegas.

Next, let's say that not only is Phoenix-and-Oakland-Tomac the real deal, but the 2016 Supercross season for him was irrelevant because it involved a new bike and recovery from injury.  We'll throw out 2016 and assume the rest of 2017 looks like Oakland and Phoenix, and re-do the calculation:

Now, Tomac comes out on top, being favored to win the remaining races (with a 66% win probability for each race -- again, see The MX Book for a discussion of Win Probability) and resulting a predicted final standings of Tomac in #1 with a razor-thin 376 to 373 point lead:

So, if you're on the Eli-can-win-it-all train, then here's some good news: if his last 2 races are the new normal, he might actually be the favorite to win.  I wouldn't bet the house on it since 2 data points (Phoenix & Oakland) usually lose when matched up against dozens (the rest of 2017, plus 2016 & 2015) -- but it's definitely possible that a rider can improve his true-talent all of a sudden.  And it's not like Tomac hasn't shown great speed in the past, he just hasn't tapped it consistently.  Each week that he can add a data point that Phoenix-and-Oakland-Tomac is the real deal, these hypothetical projections above become more and more realistic.